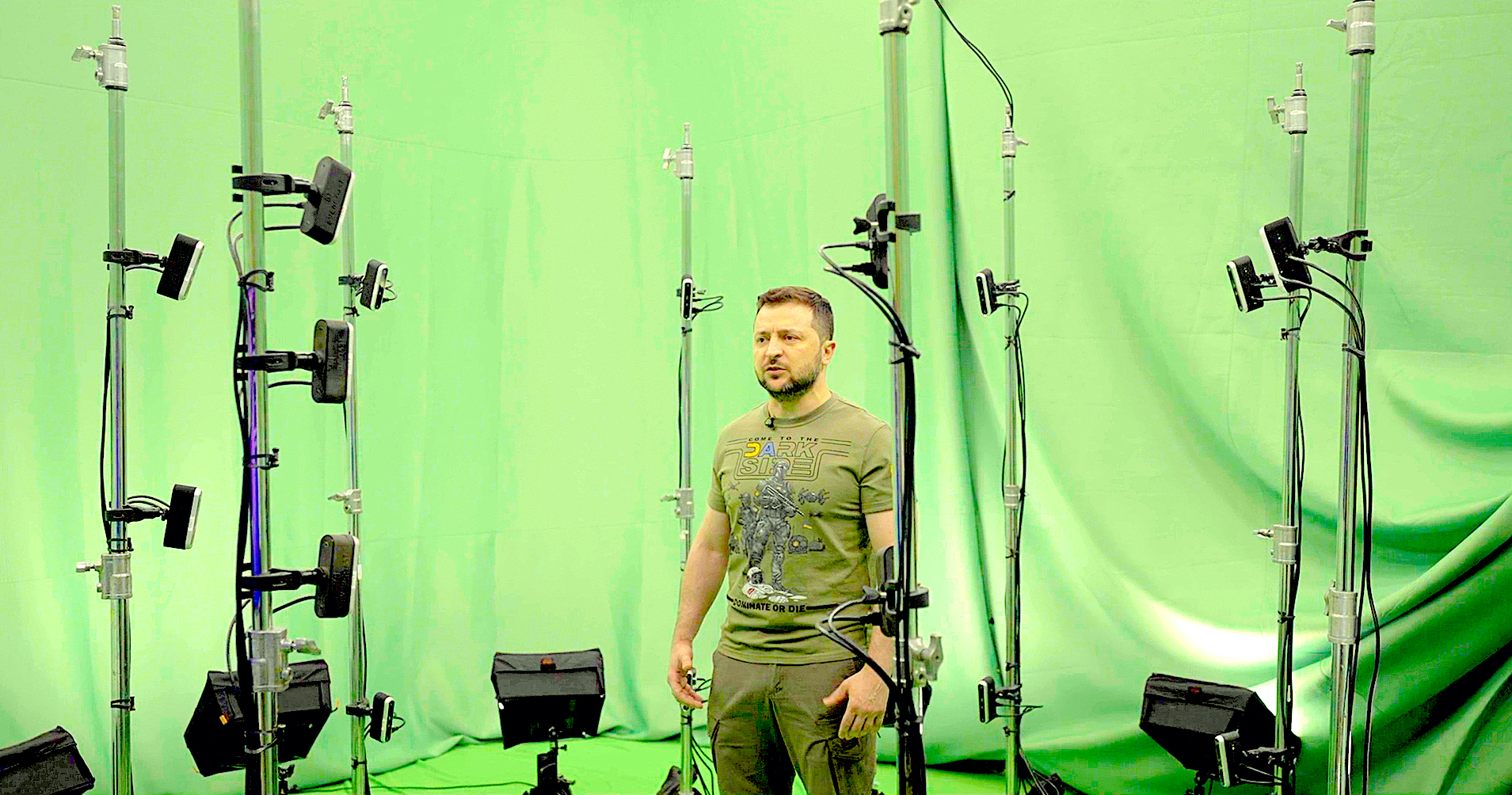 16 June 2022 - LONDON -- Talesmith, the London-based high-end factual content producer is behind the holographic speech from President Zelenksy delivered earlier today at Founders Forum London. The Ukrainian leader’s call for support in his country’s war against Russia was recorded at his headquarters and beamed simultaneously into four major tech conferences across Europe, as well as direct to smartphone users worldwide using immersive AR technology.

Commissioned by Founders Forum and Thomas Hoegh of Garden Studios, Talesmith Founder and multi-award-winning director Martin Williams has been on location in Ukraine with President Zelensky, with a local team who built the rig in secret just over 24 hours. ARHT Media provided cutting-edge technology to create, transmit and receive a holographic image of the President, and Evercoast has created an avatar for smartphone users worldwide.

With an additional message from Prime Minister Boris Johnson and an introduction from high-profile activists, CEOs and humanitarians, President Zelensky delivered his plea for investment in Ukraine’s digital transformation to the world’s most influential tech and creative CEOs at Founders Forum in London, Brilliant Minds in Stockholm, The Next Web in Amsterdam and Vivatech in Paris. Additional streams were fed to Dublin Tech Summit, London Tech Week’s AI Summit, and SuperReturn in Berlin.

Forty-five years since Princess Leia was beamed across the galaxy as a hologram, and dressed in a Star Wars t-shirt featuring storm troopers stamping on the enemy, President Zelensky said:

“We live in a time of super opportunities… Your technologies, knowledge, expertise and investments – all of these can show their value and do it in Ukraine… No other country in the world will give you such a chance to use the most advanced technologies at the state level. It is an experiment, a digital revolution… This is not the only aspect of "Star Wars" that we are putting into practice. We will defeat the empire too.”

The President also used the opportunity to promote new initiatives to stimulate the rebuild of Ukraine, including United24.

“We wanted to enable the President to share this important message via hologram and 3D avatar to exemplify the world-changing innovation the tech community is capable of delivering, and to inspire our network to develop and deploy new technologies that can help rebuild Ukraine,” said Brent Hoberman, Founders Forum Group’s Co-Founder and Executive Chairman.

Building on the company’s previous work including The Green Planet AR experience with David Attenborough, Talesmith worked with Evercoast to volumetrically capture the President giving his speech to enable it to be turned into a major immersive AR experience for smartphones. Users around the world can use the bespoke QR codes below to watch an avatar of President Zelensky deliver his speech in their own homes and offices.

Talesmith is also set to produce a one-off documentary about the conflict, based on their exclusive access to President Zelensky.

Martin Williams, Director and Founder of Talesmith says: “President Zelensky has captured the imagination of millions of people around the world of all ages – from GenZ to their grandparents. This appeal to technology innovators and leaders around the world shows just how extraordinarily forward-thinking he is. We are honoured to be working with him on such an ambitious remit, alongside Founders Forum, Garden Studios and with the support of Evercoast and ARHT.”

Ruth Roberts, Creative Director at Talesmith added: “We were delighted to be asked by Thomas Hoegh to lead and produce this truly unique project. I’m proud of the Talesmith team so confidently taking this challenge on, as well as gathering the material for what I hope will be a special documentary full of personal moments with President Zelensky captured while our team has been with him.”

The event has been supported by a host of high-profile politicians, CEOs, activists and humanitarians in the US and UK, led by Prime Minister Boris Johnson and including Gayle King, Bernard Henri-Levy, Ozwald Boateng, Peter Gabriel, Irra Ariella Khi, Oleksandr Balabanov, Brent Hoberman, Amanda Holden, Nile Rodgers, and Dima Schwetz.

Talesmith is a multi-award winning production company at the forefront of premiumfactual content for broadcast, museums, cinema, immersive AR and cutting-edge VR. ItsBAFTA and Emmy-winning leadership team of Martin Williams, Ruth Roberts and MarkWright has worked across some of television’s most successful factual productions of recentyears, partnering with A-list talent including Sir David Attenborough, Prince William and President Obama.

As an ambitious and innovative company, Talesmith constantly pushes the boundaries of storytelling, embracing new technologies and techniques.

Founders Forum Group is an event-powered community and family of businesses supporting entrepreneurs at every stage of their journeys.FF’s invite-only forums unite founders, investors, corporate and government leaders to tackle era-defining questions in iconic locations across the globe. This year’s event line-up includes flagship forums in Singapore, London, New York and Berlin.Since 2019, Founders Forum has partnered with Informa Tech to celebrate the strength and diversity of UK tech through London Tech Week. The joint venture allows London Tech Week to enrich its impact and expand its reach with sector-specific and diversity-driven events including ClimateTech, Elevating Founders, EQL Her, the Future of Work summit, and HealthTech.Fuelled by the connections and ideas forged at the group’s flagship events, Founders Forum businesses support the needs of today’s founders via education (01 Founders, Framework, Smartup, and the Centre for Entrepreneurs’ NEF+ programme), professional services (Founders Keepers, Founders Law), networking (Grip), investment (Creator Fund, Founders Factory and firstminute capital) and charitable giving (Founders Pledge). In 2021, the group sold its innovation strategy consulting firm, Founders Intelligence, to global consultancy, Accenture.

Live From Founders Forum London. Documentary based on exclusive access to Ukraine’s leader is set to follow.
Pubished on
June 16, 2022
Category
Company announcement
No items found.